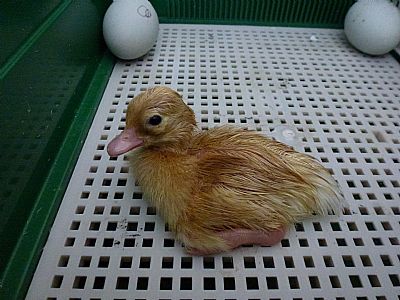 Call Ducks are a bantam breed of duck that were originally used as decoys for duck hunters. Their loud quacking would attract other ducks into an area which would then be destined for the pot.

Ours lead a more cosseted existence.

So why keep ducks if not for the pot? Well ours produce eggs - which are great for baking with. But their main use is that of a slug patrol for the veggie plots. As Bill Mollison, founding father of Permaculture, once said, “You don’t have a slug problem. You have a dearth of ducks.”

We bought our ducks as fertile eggs from eBay and popped them into the incubator. 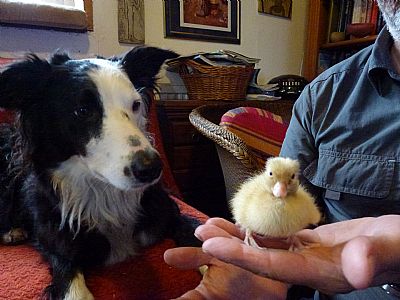 Duck eggs take approximately 28 days to hatch out during which they need to be kept at a constant temperature and need to be sprayed with water to keep them moist. I made out an Excel spreadsheet telling me what to do which I can email you a copy of if if you contact me. You just have to fill in the date when you put yours into an incubator and it’ll automatically work out what you have to do and when!

Watching ducks hatch is magical. For about a day before they finally emerge the egg starts rocking to and fro and you can see cracks (and often a small bill) appearing as the hole gets bigger and bigger. When the duckling finally emerges they look bedraggled, frail and helpless – and you feel that they’re so weak they can’t possibly survive and that you must do something to help. 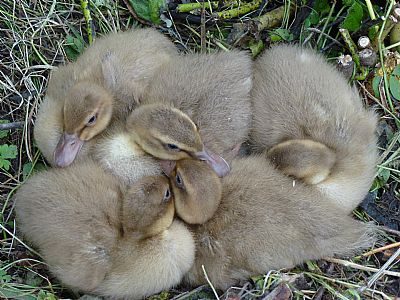 The best help you can do is nothing – apart from leaving them alone in the warm to recover in their own good time.

After ten or fifteen minutes they'll probably be sitting up and cheeping like mad! Our first duckling, Mucky, certainly was.

After a day they’re perfectly capable of having their first swim but their waterproof feathers don’t develop for several weeks as Mum isn’t available to secrete waterproofing for them so we always ensured that they were gently dried with a towel and put under their heat lamp to keep cosy afterwards.

After three weeks they were out in their Eglu Classic and run with a washing-up bowl to swim in and by six weeks they were free-ranging in the garden - under supervision as I have a cat. 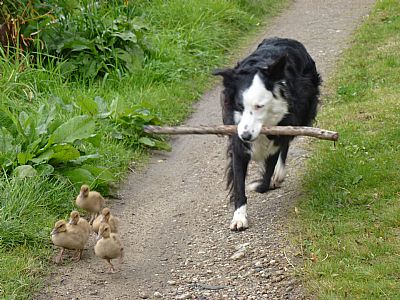 After a couple more weeks it was obvious they could take care of themselves as they successively chased off chickens, cat and border collies.

We had so much fun with the first two white ducks, Mucky and Muddy, that we decided to get another half a dozen eggs and try again. Five out of the six hatched so we now have Stan and Ollie, Ola, Erin and Flavia as well.

Raising ducklings is both satisfying and good fun but also a lot of hard work and commitment. After hatching they need to be kept in a secure and warm environment and cleaned out regularly. VERY regularly! It’s amazing how much poo a few small ducks can excrete. But watching those little balls of fluff (and then feathers) develop into seven distinct, but naughty, little characters has been one of the most satisfying things I have ever done.

Two years on and the family has grown up. Keeping ducks is a completely different ball game to keeping chickens. Chickens can't get through the gaps in the electric fence. Ducks can and they're not too bothered about getting stung by it either. We thought we had lost a couple of girls ... but then we found them nesting in the neighbour's hedge....for details of what happened next click here... :)